Now a standout on the SmackDown LIVE roster, the former Andrade ‘Cien’ Almas has arrived in Mattel WWE NXT form with this Ringside Collectibles Elite Exclusive!

Andrade has dropped his extended name and is making sure everyone knows him as a no-nonsense, athletic fighter. His classic gear is featured in this Elite figure with white tights and knee pads. He also includes a hat accessory and NXT Championship! This is the perfect way to bring Andrade into your wrestling action figure roster as quickly as possible. Check out images below: 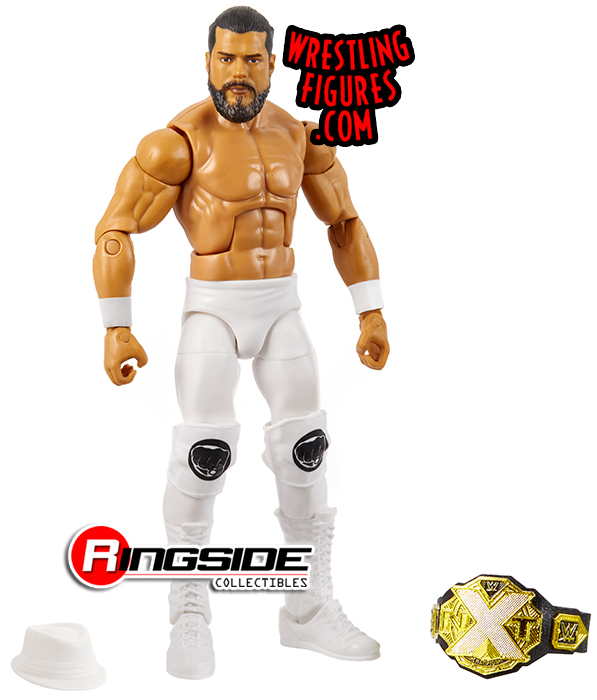 The War Raiders have exploded onto the NXT team and quickly become one of the top tag teams not only for the yellow brand, but in the world of professional wrestling overall. With their wild-eyed, intense looks and over the top ability to take high risk maneuvers despite their hulking size, fans immediately took notice as they began to dominate the tag team division. Since become NXT champions, it’s only a matter of time before Rowe and Hanson become Mattel WWE War Raiders!

The War Raiders seem perfectly suited for Mattel WWE NXT figures. They have intense physiques with tattoos that would be perfect for an Elite figure or a series figure featuring Mattel’s attention to detail. Since capturing the NXT Tag Team Championships, they’d be perfectly suited to come with those titles as accessories as well.

Raymond Rowe’s beard and tattoos show a level of intensity not often seen in NXT. He’s a hard hitter, flies high and wears classic, dark trunks. He’d be a great addition to the Mattel WWE NXT family and likely will look just as intense when he’s inevitably on the main roster.

‘Warbeard’ Hanson also has a butt-kicking look with a wild beard that would be perfectly molded and a thick, muscular body type that could be immortalized in a Mattel WWE mold. What’s notable about Hanson is the entrance gear he chooses to come to the ring with. His is slightly more elaborate than Rowe’s, though they would both make perfect wrestling figures thanks to the detail of the very same gear.

As the War Raiders continue to dominate NXT, their future only looks up. Until then, we can speculate that they will have some just as dominant Mattel WWE NXT figures be released!

Do you hear that, fellow bros? It’s the sound of Matt Riddle – the self-proclaimed ‘King of Bros’ – winning matches and taking the NXT brand by storm. Since leaving mixed martial arts behind, Riddle has become the talk of the wrestling world, winning matches on the independent scene before joining the NXT brand and making a splash like never before. With MMA-inspired ring gear, it’s only a matter of time before Riddle becomes one of the most sought after Mattel WWE figures!

With his debut suit and tie being the first step to an NXT ‘takeover’ of sorts, Riddle looked sharp and spiced it up with a sick fitted cap. Because of this, it wouldn’t be unlikely that a wrestling figure version of Riddle after signing with NXT would be something that fans could want in their collection. Bringing the style and look that no other ‘bro’ has, this would be a great first look before getting into his ring gear.

Riddle tends to stick to yellow looks and clothing, often wearing a fitted yellow track jacket that accompanies his ring gear. He has since worn gear featuring ‘BRO’ in the front custom made to reflect his personality. This is usually a tight trunks style that is perfect to call back to his UFC and MMA battling days.

Also worthy and of note are Riddle’s trunks during his run in the independent scene which closely match his current NXT trunks, and his incredible physique. With one of the more notably ripped physiques on the roster, Riddle will have to feature a wrestling action figure mold that reflects this or his figure will be done no justice.

Now that he has cemented his place in NXT, Riddle has mixed up his look about, branching out to looks like the red and black style above. He has also worn headbands and at times performed barefoot in the ring, so his figure could reflect those details as well. Since there is definitely a barefoot Mattel WWE mold, a barefoot Matt Riddle would be the ultimate ‘bro’ figure! As we wait for the debut NXT Matt Riddle figure to debut, his dominance in NXT will keep the entire WWE Universe entertained.

Fresh off San Diego Comic-Con 2018, it’s Mattel WWE Elite 62, wowing the crowd and being put up for pre-order at Ringside Collectibles! Elite 62 includes:

END_OF_DOCUMENT_TOKEN_TO_BE_REPLACED

The incredibly gifted, amazingly athletic Ricochet has hung up his indy tights for good after taking over Dragon Gate USA, Evolve, New Japan Pro Wrestling and even Lucha Underground. Now as part of the WWE NXT roster, he’s wowing fans on a regular basis with his abilities. After a few triumphant NXT wins, he has cemented himself as a wrestler to watch as he climbs the NXT ladder. Because of this talent, it’s only a matter of time before he joins the wrestling action figure line!

END_OF_DOCUMENT_TOKEN_TO_BE_REPLACED

After spending time as NXT standouts, Billie Kay and Peyton Royce are now wowing the WWE Universe as members of the SmackDown Live! roster. After making a massive splash as ‘The Iconic Duo’, the two have graduated to calling themselves ‘The IIconics’ and bring a wild, Australian intensity to the women’s division. As their appeal broadens and their fan base grows, it’s only a matter of time before The IIconics receive Mattel WWE wrestling figure treatments!

END_OF_DOCUMENT_TOKEN_TO_BE_REPLACED

Hey BAY BAY! It’s time for Mattel WWE wrestling figure treatments of Adam Cole, Bobby Fish, Kyle O’Reilly and Roderick Strong…otherwise known as The Undisputed Era! These NXT standouts have knuckled up to be partners the likes of which the wrestling world has never seen. It would be no surprise to see them appear as NXT figures in the near future!

END_OF_DOCUMENT_TOKEN_TO_BE_REPLACED

The newly revamped Mattel WWE Entrance Greats Series has offered yet another surprise with Bobby Roode! The NXT standout and now WWE SmackDown Live! staple is ready for action with his first ever Mattel WWE action figure!

END_OF_DOCUMENT_TOKEN_TO_BE_REPLACED

The infectious Enzo Amore and Big Cass have been torn apart for months now, and the WWE Universe has yet to heal from the wounds. Ever since it was found out that Big Cass was the one who attacked his former best friend Enzo Amore, fans have been heartbroken over the once inseparable team. While the team may be gone for now, their Mattel WWE wrestling figures…both together and separately…pack plenty of punch.