We all watched, we all cried. Ric Flair retired at WrestleMania XXIV, coming to the ring with amazing prowess and pride as he faced Shawn Michaels in what would be the final match of his WWE career. As he beckoned HBK to deliver him a final Sweet Chin Music, tears streamed down his face in a now classic moment. That very moment will now be forever commemorated thanks to the newest Mattel WWE Defining Moments Ric Flair!

END_OF_DOCUMENT_TOKEN_TO_BE_REPLACED

Ric Flair is one of the greatest wrestlers of all time, no questions asked. With charisma, ability and a larger than life presence, few true wrestling fans would argue not only his place in wrestling history, but his influence and lasting impression. Ric Flair has notoriously not been the subject of any Mattel WWE action figures as of yet, with rumors constantly flying of his inclusion in the line. While there have been no confirmations as to when or if he will ever have a Mattel WWE figure made, with his recent appearance on Old School RAW, we can speculate and hope it could be one of the following outfits: 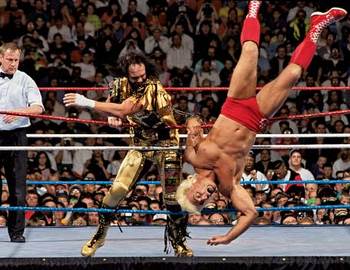 Ric Flair’s red outfit from WrestleMania VIII seems a perfect fit, matching the Mattel WWE Elite 23 Macho Man and Elite 19 Miss Elizabeth. After teasing and taunting Macho Man about Elizabeth for an entire Road to WrestleMania season, Flair finally got a spoonful of what was coming to him and is largely remembered for making a huge impact on Macho Man’s life despite losing the championship match to him. With loads of colors and styles during his WCW run, the 16-time world champion is a peacock of coolness. We decided on a purple robe as it has been rarely seen, but the possibilities are endless. Green, black and red also make up trademark Flair WCW robes and a WCW World Heavyweight championship would be an ideal accessory.

Perhaps one of Ric Flair’s most memorable moments was his retirement match with Shawn Michaels at WrestleMania XXIV. After begging for a Sweet Chin Music kick from Shawn Michaels, Flair’s wrestling career in the WWE ended. For many fans, this is an iconic look and was a sad time, having to say goodbye to one of their all time favorites. For others, it could present a modern wrestling attire for those hoping Flair will hop back into the ring for old times sake.

Speaking of old times, it doesn’t get any more classic than Ric Flair sporting a look from his time in the NWA. While this may be out of Mattel’s WWE jurisdiction, it would be a pleasure to have a version of Flair that embodies his roots and the basis for the stylin’ and profilin’ legend he became.